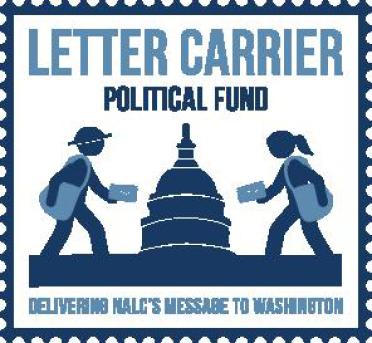 The Letter Carrier Political Fund is a non-partisan political action committee (PAC) established for the purpose of electing qualified candidates who support letter carriers and who are committed to maintaining a strong and innovative U.S. Postal Service.

Each year, NALC fights to fend off attacks in Congress that threaten letter carriers’ collective-bargaining rights, retirement benefits and livelihood. We’ve been successful so far, and we want to continue helping to elect House and Senate candidates who will protect us, promote our issues and deliver our message to Washington.

Since union dues can’t be used to support candidates for political office, NALC relies 100 percent on member contributions to the Letter Carrier Political Fund, which in turn helps us support those on Capitol Hill who defend the issues that matter most to us. Our PAC brings together in Washington strong letter carrier advocates—from all political parties—who are dedicated to helping to defend a strong USPS that provides universal, innovative and affordable service.

What is a political action committee (PAC)?

A political action committee (PAC) raises money for the purpose of defeating or electing candidates to elected office.

Why should I join NALC’s PAC, the Letter Carrier Political Fund?

How do I become a member and/or contribute?

The easiest way to become a member of the Letter Carrier Political Fund is to contribute through automatic payroll deduction. Contact your branch leaders with questions about how you can contribute or use the forms below:

The Hatch Act was reformed in 1993, opening the door for letter carriers to become actively involved in politics. Many pro-NALC candidates would not have been elected without the involvement of letter carriers across the country. Listed below are the guidelines on what active letter carriers can and cannot do in politics, Should you have any questions, call
1-800-85-HATCH.

Volunteering or managing a partisan political campaign. YES!
Holding office in a political party or club. YES!
Serving as a delegate to a political convention. YES!
Raising money for LCPF from other NALC members and their families. YES!
Contributing to candidates or political organizations. YES!
Attending fund raisers for candidates and organizations. YES!
Stuffing envelopes with campaign literature that contains an appeal for financial contributions. YES!
All fund raising activities for a NON-PARTISAN campaign. YES!
Running for office in a NON-PARTISAN election. YES!
Displaying a partisan bumper sticker on private automobile. YES!

Running for partisan office. NO!
Raising money for a candidate. NO!
Coercing another employee to make a contribution. NO!
Participating in a NON-LCPF phone bank solicitation for political contributions. NO!
Allowing the use of his or her name on an invitation or mailing for fund raising purposes. NO!
Displaying partisan posters, buttons or similar items on federal premises, on duty or while in uniform. NO!
Participating in partisan political activity on duty or on federal premises. NO!

Q.....Can we spend treasury money to pay lost time for someone to do legislative or political work?

A.....Yes, a branch can use treasury money to pay for lost time if the letter carrier is doing legislative or lobbying work, or if they are performing political activities which educate or organize NALC membership or as part of AFL-CIO COPE efforts, However, the branch cannot pay for lost time for a carrier to work directly on a partisan campaign.

Q.....Can we use our branch's phones to operate a phone bank for a campaign?

Note: Check with your local and or state AFL-CIO representatives to find out what is being done in your area. It may be more cost and time effective to join an existing operation as opposed to setting up your own.

Q.....Can we invite a candidate to speak at a branch meeting?

A.....Political candidates for elective office are allowed, and welcome, to speak to our membership at branch meetings. This can be a great way to get your membership more interested in a campaign and to recruit volunteers. If it is a political speech, the branch must make time available to all candidates.

Q.....Can we publicize what candidates the branch is supporting?

A.....If your branch is endorsing a candidate, or recruiting volunteers for their campaign, you can write about it in the branch newsletter, as long as it is only mailed to branch members.

A.....Develop and maintain relationships with local politicians-many will move on to higher office, and you will be a step ahead if you already know them. Have an annual or semi-annual legislative event where you invite your Representatives to the branch meeting. Your branch can also sponsor a candidates forum around election time. Get involved with your local labor council's COPE program-they have great resources and programs for political involvement.

In order to insure that Congress protects the hard fought benefits of both active and retired letter carriers, NALC established LCPF in 1976. Since its inception LCPF has contributed over $15 million dollars to candidates for the U.S. House of Representatives and Senate who support letter carriers and their families. LCPF is the largest federal employee political action committee and the NALC'S voice in Washington. NALC members should be proud of their legislative successes brought about through LCPF.

Political campaigns are expensive. Contributions from LCPF help re-elect our friends to Congress and defeat those who oppose letter carriers. LCPF gives the NALC and all active and retired letter Carriers a voice in Congress to counter the anti-worker groups who want to take away the benefits we enjoy. Our fight is never over. In the new Republican controlled Congress, there will be members who will try to take away our COLA, raise the retirement age and compromise the Postal service. LCPF is one of our most powerful tools to stop these efforts.

LCPF is non-partisan and supports both Republicans and Democrats. Contributions to KCOF are voluntary and cannot be made from general dues funds. Please take the time to contribute to COLCPE to support letter carriers and our union.

PLEASE MAKE YOUR CHECK OUT TO "LCPF" AND MAIL TODAY TO:

Contributions to LCPF are not tax deductible on Federal Income Tax Returns.